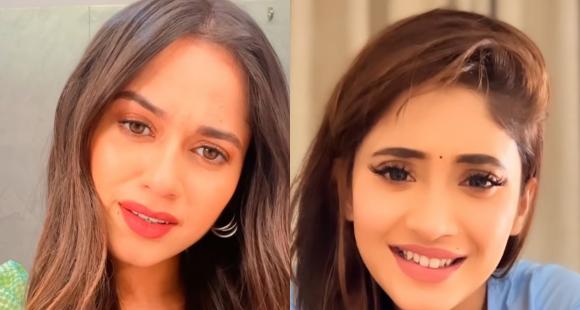 Shivangi Joshi and Jannat Zubair are amongst the top actresses in the entertainment sector. The two carved a special space in the heart of the audiences by featuring in several daily soaps and other shows. For the first time, Shivangi and Jannat made a debut in the reality genre and featured in India’s top reality show Khatron Ke Khiladi season 12. The two developed a great camaraderie while shooting for the show in Cape Town. They were called ‘Seeta-Geeta’ by everyone on the sets of Khatron Ke Khiladi 12. Even after returning to the city, the two are often spotted hanging around with each other.

Jannat and Shivangi both are quite active on their Instagram handles and often keep their fans updated on their whereabouts. The actresses recently created a reel on hilarious audio and left the netizens in splits. The concept of the audio is about a girlfriend questioning her boyfriend on why he liked another girl’s picture. In a video shared by Shivangi, she can be seen acting like the girlfriend and behaving jealously as she lip-syncs the audio. Sharing this short clip, Shivangi captioned, “#BabyKoJealous”. Jannat, too, created a reel on the same audio and captioned it, “#BabyKoJealous”.

Rohit Shetty’s Khatron Ke Khiladi 12 is Shivangi and Jannat’s first reality show. Shivangi fearlessly squared up to all the challenges and rose under tremendous pressure. She has performed a plethora of stunts such as shock stunts, underwater stunts, and stunts with hyenas and creepy crawlies. Speaking about her elimination stunt, despite feeling unwell, she completed the elimination stunt but lost to Pratik just by a second which led to the end of her journey.

On the other hand, Jannat is seen giving a tough fight in every stunt and is being praised for fearlessly performing the tasks.